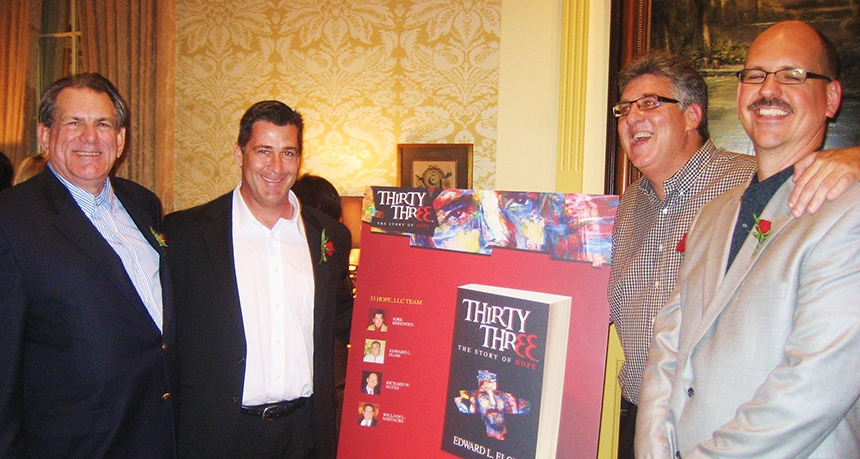 Our managing partner, Kirk Berendes, came to me to tell a family story. He had taken his four children to see Mel Gibson's The Passion of the Christ, the vivid cinematic portrayal of the last twelve hours of Jesus of Nazareth's life before His death by crucifixion. All of the children were enthralled by the movie and one of them, the aptly named Christian, turned to Kirk and asked, "But, daddy, what happened next?" Our foundational book, Thirty Three, The Story of Hope, was designed and written to serve as the central content for our multidimensional brand, The Thirty Three Hope Project, and will tell the story of "what happened next?  As the author, I sought to illuminate how the life, resurrection and post resurrection sightings of an itinerant Rabbi sparked a fervent movement in the Year AD 33. A movement that manifested despite the historical fact that any participation in this movement at this moment in history was tantamount to a death sentence for the early believers. A simple, profound story of hope and remembrance written for a time that is crying out for meaning and inspiration.

The story begins in the late afternoon of April 3, AD 33 as Joseph of Arimathea and Nicodermus are preparing the Rabbi's scourged and shattered body for a proper burial in accordance with the Law of Moses and concludes as The Great Persecutor, Saul,  is converted and baptized after being struck blind on the Road to Damascus in the fall of AD 34.  The narrative unfolds as a historical novel and accurately depicts - with characterization, dialogue and a careful study of the Scriptures - the enormous tensions that arose between the ruling Temple Council of priests and community leaders known as the Sanhedrin, the Roman Empire, and the eleven remaining disciples and early devotees of the Risen Christ. Of course, the central protagonist is Jesus Christ, as it was His revoluntionary words to "Repent and seek the Kingdom of God" that was so threatening to the ruling elite of Jerusalem and the Roman Empire. A holy exhortation that would ultimately, nonviolentally convert that very Roman Empire in less than three hundred years and would become the central organizing principle in the history, art and culture of the western world for the next two thousand years after His crucifixion.

Many authors have written beautifully on the Resurrection but the story of the forty days in which Jesus appeared eleven times to His followers after the Resurrection and before His Ascension is largely untold in a popular, readable fashion. Perhaps the absolute brilliance of the Resurrection diminished the post Resurrection events in comparison - nonetheless, it is a story that needs to be told for we are facing many of the same challenges in a deteriorating modern world. The twin imposters of materialism and consumerism were exposed as non sustaining systems in the recent global economic downturn and the timing to present this timeless story of hope is upon us. Now is the moment to remind the world that the seemingly overwhelming challenges of a threatened world order have been faced before, and transcended. This is the reason we were brought together as a team and we invite you to join us in sharing the Good News.

With this in mind, we have joined with an amazing and committed team of top professionals which you may review on our Team Page. These men and women have worked long and hard to bring four connected initiatives to fruition: 1) The National Release of the Book as published by Sound Enterprises, Inc, a company founded by the actor, Jim Caviezel, who portrayed Jesus in The Passion of the Christ  2) The creation and release of our 33 Hope Anthem, He's Alive, written and composed by Nashville Producer, Dale Oliver, and performed by the popular Jupiter Wind band 3) The completion of a deeply moving, screenplay for the film version of the story by Cristobal Krusen, the international movie director/writer of Messenger Fillms and Moonlit Pictures which is currently in pre production and 4) A Social Media based Web Community where we can speak with you directly and connect likehearted people together in mission.

It has been the most incredible journey over the last eighteen months. There is no question that God has been the driving force of this project - He has shown us the way to full expression, step by ordered step. We invite you to get involved at any level and to know that you are welcomed and needed. Now, it is our time to build upon the boldness and courage of our spiritual ancestors. It is our time to promote a unification of the Church by recalling the original story of the early Followers of the Way, who witnessed the Rabbi Jesus and the Risen Christ with their own eyes. This is our shared challenge which we ask you to embrace with us in obedience and humility.

Our full movie-screenplay is completed and it is a riveting, powerful telling of The Story of Hope. It has been beautifully written by Writer/Director/Filmmaker Cristobal Krusen of Messenger Films, Inc.

Interested in changing the world? Please feel free to email Kirk Berendes at kberendes@33hope.com or call/text at (813) 765-9264, thank you!